One of North America’s top yacht manufacturers, Westport offers a range of yachts in the 112- to 164-foot range

As the largest luxury yacht builder in North America, Westport Yachts has built a reputation for building boats that are the epitome of elegance, comfort and style. 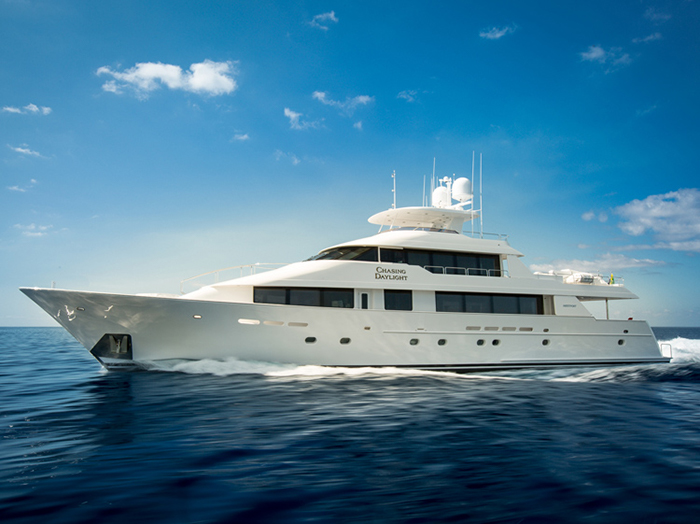 Westport’s yachts are renowned for their durability, performance and comfort. The company has a commitment to exacting standards – similar to those used in aerospace engineering – and that’s helped Westport earn a reputation for delivering some of the finest crafts on the market.

These superyachts – like the 50-meter Westport 164 – utilize the latest technology, like gyrostabilization, spacious deck layouts, and opulent interior design to ensure supreme comfort while cruising the high seas.

A number of Westport yachts are available for charter through Worldwide Boat, including Westport’s 112-, 130- and 164-foot superyachts.

Westport has long been a ship builder. In fact, the company was originally launched in 1964, first establishing itself as a producer of fishing boats, passenger ferries and other commercial vessels.

Based in Washington state, Westport was one of the first shipbuilders to popularize the use of composite materials in construction, and today, the Westport remains a leader in composite design and construction. Composite fiberglass – now widely used in yacht construction – maximizes the life of the vessel, while reducing maintenance costs due to its superior sturdiness, and it’s one reason Westport’s yacht are some of the most popular on the market.

To date, Westport has developed 200 different commercial ships and yachts. And in the last three decades, the company is widely recognized as a leader in superyacht construction. Today, Westport specializes in raised-pilothouse and tri-deck motor yachts in the 30-50 meter range.

A Closer Look at the Westport Luxury Yacht Lineup

Westport offers one of the most popular ranges of megayachts in the industry. In particular, the company’s 112-, 130- and 164-foot offerings are top choices among yacht buyers (with a recently introduced 125-foot yacht gaining in popularity, as well).

Here’s a rundown of Westport’s most popular vessels, all of which are available for charter through Worldwide Boat:

What makes Westport Yachts so special? From the immaculate interiors, to the serious performance, Westport’s reputation as a leader in superyacht design is well-earned.