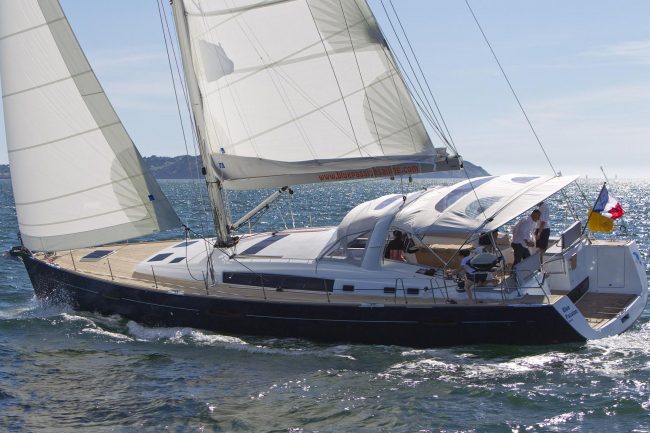 The Beneteau story began in 1884 on the quays of Croix-de-Vie, in Vendée, France. Benjamin Beneteau created a boatyard that would give birth to the first fishing boats, making the Beneteau name synonymous with fine fishing vessels.

Unlike the traditional workboats that fishermen had been accustomed to, Beneteau’s featured finer lines and distinctive hull shapes, improving their performance. With the dawn of the engine in 1909, Beneteau was inspired to create the first engine-powered fishing boat in this region. In 1912, this revolutionary new fishing boat was launched, powered by an engine and without masts. Although the industry was skeptical, they trusted Beneteau’s reputation.

Benjamin’s son, André, inherited this thriving business in 1928, and while they were still known for fine boats, Andre was not a great businessman. It wasn’t until the mid-1960s when Benjamin Beneteau’s grandchildren took over that it became successful once again. Under Annette Beneteau Roux’s leadership, a line of fiberglass boats was launched. The fiberglass vessel – with a small cabin, mast and keel – debuted at the 1965 boat show in Paris, and was an instant success. Now that people had time for recreation, Madam Roux focused on building sailboats that were easy to operate for this growing market.

Renowned naval designer André Mauric designed the First 30 for Beneteau, This racing sailboat won the Salon Nautique de Paris’ boat of the year award in 1978. Mauric continued to design power boats, developing the popular Antares line for fishing and cruising. With this, Bénéteau’s reputation grew across the world.. Two years after going public in 1984, the company opened a new manufacturing facility in Croix de Vie, and a US facility in Marion, SC, as they developed the Oceanis line of cruising sailboats.

In the 1990s, Bénéteau acquired Contruction Navale Bordeaux, a shipyard specializing in luxury aluminum sailboats. It also purchased Jeanneau when it went bankrupt, and picked up Lagoon catamarans. Madame Roux started restructuring the company in 2001, forming four separate divisions: a pleasure boat division with Bénéteau and Jeanneau; a shipbuilding and large pleasure boats division for CNB, Lagoon, Wauquiez, Voyager TM, and Bénéteau Pêche; a mobile home division; and a vehicles division. On Beneteau’s 120th anniversary in 2004, management was turned over to a board. Bénéteau Inc. was created as a holding company for Groupe Bénéteau’s North American Boat Operations that includes Beneteau America, Inc., Jeanneau America, Inc., and BGM America Inc.

Over 130 years later, Beneteau is a global leader in the pleasure boat market. The brand has built more than 100,000 yachts that are still inspired by Benjamin Bénéteau’s passion for innovation. Beneteau is the world’s largest producer of sailing yachts in the world, and has been awarded 100 trophies for innovation and design in more than 20 countries. With five factories in the Vendée region of France, and one in Marion, South Carolina, its prestigious fleet of yachts have welcomed more than 4 million passengers.

Beneteau Charter Yachts
Looking for the perfect boat for your charter?
We have access to over 1,000 charter yachts and not all of them are listed on our website.
Yacht Search
Or Contact us