Bravo’s Below Deck was an instant smash hit when it premiered in 2013. Viewers couldn’t get enough of the behind-the-scenes look at the yacht charter industry. In fact, the show was so popular, the network ordered a spin-off in 2016, Below Deck Mediterranean.

If you’ve never seen the show, it follows the crew of a luxury yacht during peak “charter season.” The original Below Deck, for example, showed off the glitz and glamour of the Caribbean, especially around St. Thomas, the British Virgin Islands, and the Bahamas. The Mediterranean spin-off, on the other hand, highlights European hotspots, including Italy, Spain and Croatia.

The show is undeniably a ton of fun. From the drama in the crew quarters, to the incredible beaches, the show provides an entertaining look behind the curtain.

Yet, the chartered superyachts are the real stars of the show. Each season, Below Deck features a truly stunning super yacht. All of them measure over 150 feet and are decked out in opulent features, staterooms and amenities. And here’s something you might not know: The majority of the Below Deck yachts are available for charter!

Through five seasons, Below Deck has featured some of the most magnificent super yachts in the world. Some of the yachts have changed ownership since the show, been renamed, or have undergone a refitting. Yet, most look like they did from the show.

But beyond the name and maybe a few changes to the interior, there aren’t many differences. All of the water toys, Jacuzzis and stunning outdoor dining areas are what you’ll find on the yachts available for charter! So which charter yachts are available?

Here’s a more detailed look at the yachts featured on the original Below Deck: 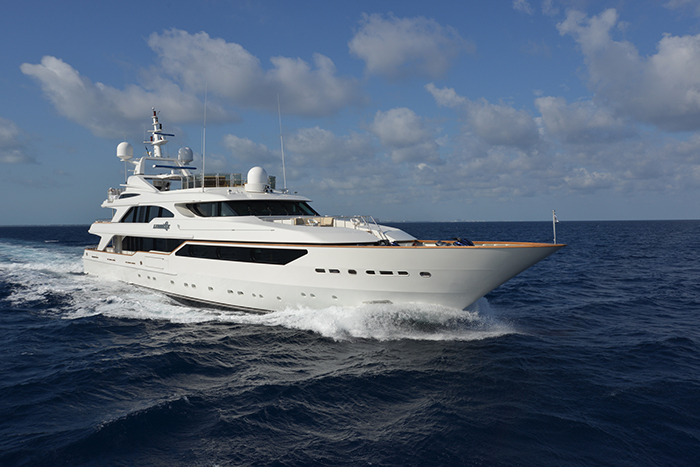 Honor (which is now LUMIERE) kicked off the first season, and she put on a dazzling display. The yacht, originally built by Benetti in 1999, is one of the largest yachts ever featured on the show, and it was actually booked for a five-week charter for filming.

HONOR benefited from the new-found fame of the show. She sold after it aired for nearly $15 million, and the new owners completely refit her interiors and renamed the boat. Today, LUMIERE is a masterpiece of nautical engineering.

She features luxurious accommodations for up to 12 guests and an abundance of deck space, including a sprawling sun deck. The yacht also features a wide array of water toys (the slide was a struggle for the crew all season!). 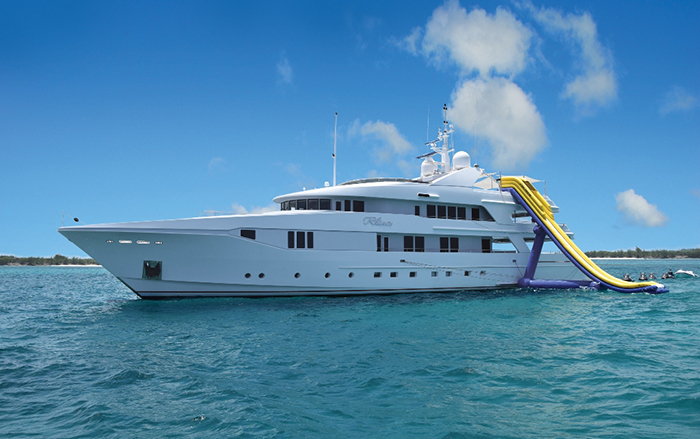 Season 2 took the crew on a tour of the British Virgin Islands and featured some familiar faces. Captain Lee, Chef Ben, and Bosun Eddie were back, much to the pleasure of fans. Yet, the yacht was completely different.

OHANA (real name is RHINO) was featured on the second season, a stunning 154-footer, with beautiful decks, a horseshoe outdoor bar, and a stunning outdoor sun deck. After the show aired in 2014, Ohana underwent an extensive retrofit.

She now features an updated interior with a decidedly modern, airy vibe, as well as new hardware, including a state-of-the-art stabilization system. 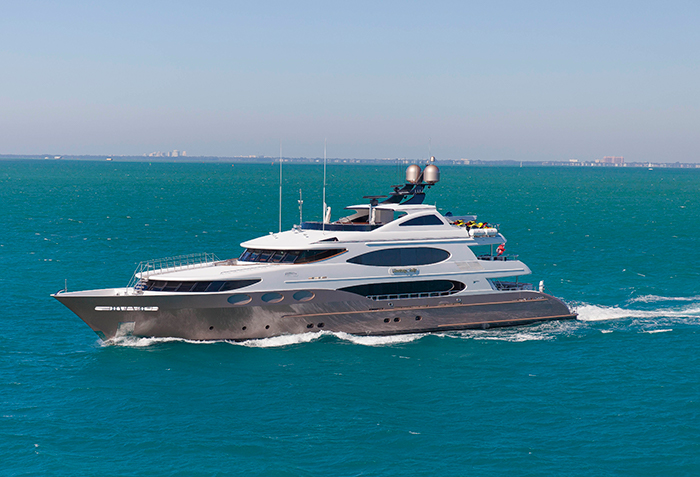 EROS took centerstage in Season 3, and the 161-foot yacht, originally built for the founder of Tim Hortons, was one of the most luxurious featured on the show. The beautiful tri-deck, featured a stately saloon, a sky lounge Jacuzzi, and sleek exterior styling.

EROS – which was sold prior to the third season – has since been renamed and was also remodeled. She’s now known as Mustang Sally, and unfortunately, this is one of the few Below Deck charter yachts that’s not available for charter. 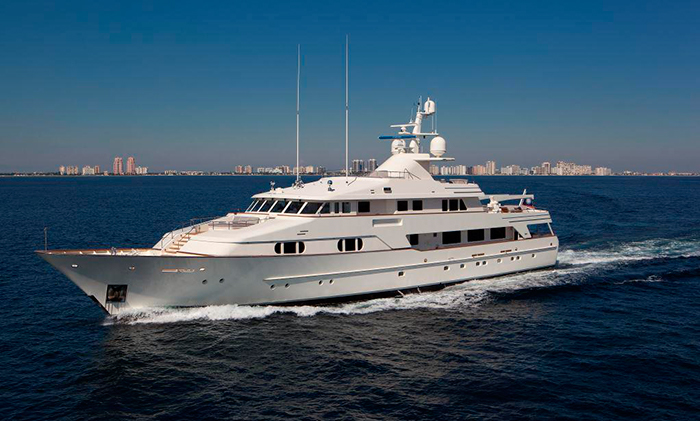 The stately VALOR was a fan favorite in Season 4 and 5. Built in 1990 by Dutch-based Feadship, the 154-foot VALOR featured a sprawling aft deck, perfect for sunset dinners and afternoon lounges. Plus, the ship – when featured on the show – had a range of water toys, including dual jet skis and a sleek, boutique hotel-inspired interior.

Like Mustang Sally, VALOR – which is now known as simply BG – isn’t available for charter. Yet, fans will always remember all the drama that took place on board.

Below Deck Mediterranean premiered in 2016, and through three seasons, the show has featured some of the Med’s best yachts. All of the yachts from the Mediterranean spin-off are available for charter, exactly how you see them on the show. 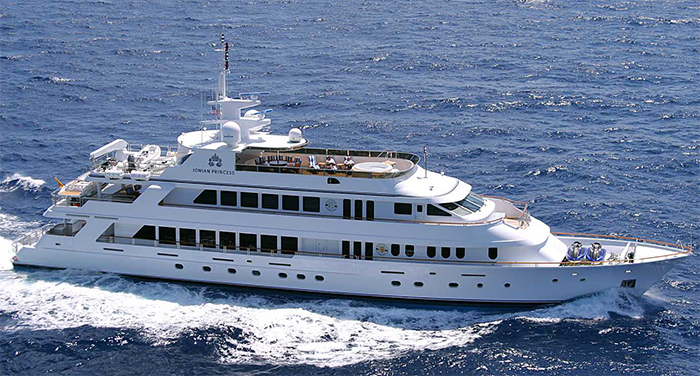 Season 1 of Below Deck Mediterranean launched with a bang, featuring one of the strongest premieres for the franchise. Although there was plenty of drama throughout the season as the crew traveled around Greece, the beauty of IONIAN PRINCESS couldn’t be missed. The ship, which was originally built in the U.S. in 2005, featured a sleek, streamlined tri-deck design and gorgeous interiors.

The sun deck – where guests partied all season long – is one of the yacht’s star attractions, featuring a Jacuzzi with world-class views. Her interior, though, is one of the most stunning, featuring a chic design. The yacht also includes six cabins with accommodations for up to 12 guests. 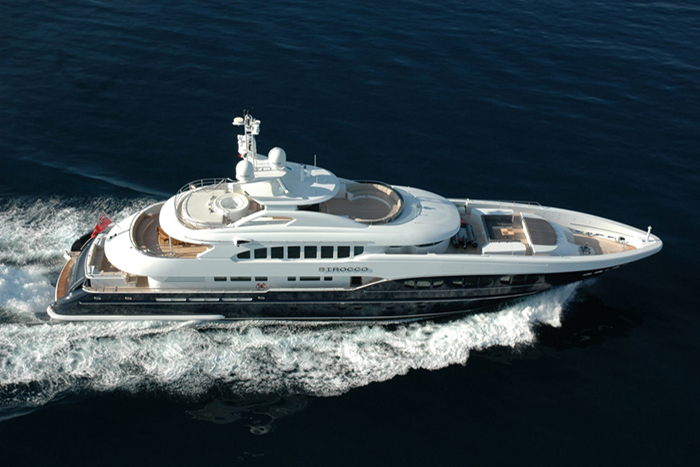 Season 2 took the crew to Croatia, aboard SIROCCO. The Dutch-built yacht originally launched in 2006, and thanks to its unique two-tone, third-deck exterior, she was remembered for her striking exterior. All of the yacht’s features made great TV. From her incredible sun deck, to the African chic interior, and all of the many water toys, SIROCCO’s impressive design and amenities stood out.

Today, she’s available for charter throughout the Mediterranean. A few unique features include a sun deck gym, an alfresco party deck, a theatre, and a wide array of water toys. 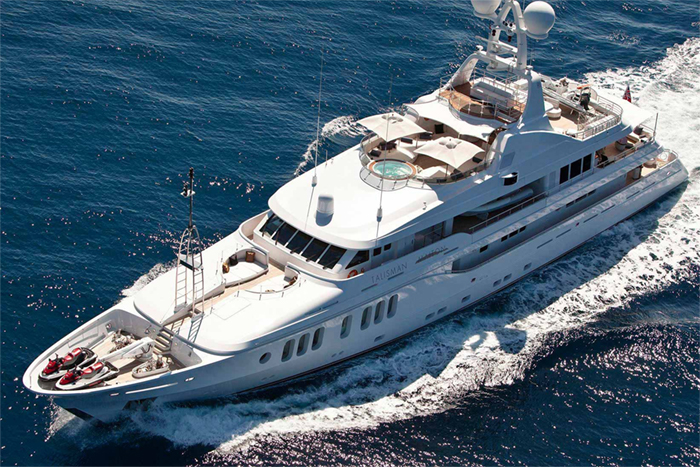 Named for an island in Thailand, TAILSMAN MAITON is a stunning tri-deck that cruises the pristine waters of Italy and all of the Mediterranean. The largest to ever be featured on the show, TAILSMAN is truly incredible.

The yacht accommodates 12 guests, in 6 beautifully appointed rooms. There’s a master suite, as well as 1 VIP stateroom, and four smaller cabins. The yacht was built in 2006, but most recently refit in 2016 with a timeless Art Deco aesthetic. The yacht also features a sundeck spa pool with a beautiful bar, a full-service gym, and an observation deck with panoramic views.

How Long Are the Below Deck Charters?

Here’s a little-known secret about Below Deck: The “charter season” on the show is just a few weeks. In fact, the yachts are actually booked for about six weeks, and their regular crews are sent home. In other words, the charters on Below Deck are actually a charter within a charter!

Each of the Below Deck charters last just a few days, and each episode features new charter guests.

Hiring a yacht from Below Deck isn’t cheap. The majority cost in the neighborhood of $150,000 per week. Yet, that charter rate doesn’t include expenses, including fuel, dockage fees, and taxes.

Yet, for that price, you’ll get a truly world-class experience. The crews of each of these yachts provide first-class service and all of the boats are fully loaded with amenities. There’s nothing quite like it in the world. And by hiring one of these superyachts, you’ll also have bragging rights for chartering a yacht featured on a TV show!