Antarctica yacht charters are the ultimate adventure. Of all the yacht charter destinations in the world, Antarctica – believe it or not – is one of the most tranquil and undiscovered.

Antarctica is stunningly beautiful. Crystalline icebergs and sapphire blue glaciers dot the waterways. And the wildlife – with huge populations of seals, sea birds and whales – is a photographer’s dream.

Not to mention, the serenity is off the charts. Yacht charters in Antarctica provide a chance to completely relax, unplug and explore one of the world’s most remote corners.

Interested in cruising in Antarctica? The destination isn’t nearly as well-know as Caribbean or Mediterranean yachting hubs. But in terms of adventure, natural beauty, and one-of-a-kind experiences, Antarctica provides charter guests with action-packed itineraries in one of the world’s most uniquely beautiful environments.

Antarctica Yacht Charters: What to Expect

King George Island and the Antarctic Peninsula are the primary charter hubs, with the majority of traffic traveling through the Chilean base on the island. The island is equipped with a 1600-meter airstrip, and it serves as a hub for travel and charters in the region. Wondering how you’ll get there?

The majority of flights to King George Island originate in Punta Arenas, one of the largest cities in Chile’s Patagonia region. The flight takes two hours, and nearly 50 flights are available each year.

What About the Weather? Most of us assume Antarctica is a harsh environment with nearly inhospitable weather. Yet, for a large part of the year, the weather is cold – but comparatively mild.

Really, there are two seasons in Antarctica, winter and summer, as temperatures hover between freezing and above-freezing. In winter (October to April), the weather is especially cold, with temperatures often below-zero.

During winter, the population drops by half. Most Antarctica yacht charters, though, take place in summer (October to April). During the summer months, the temperatures hover in the 30s and remain mostly above freezing.

Chartering in Antarctica – Things To Do & See 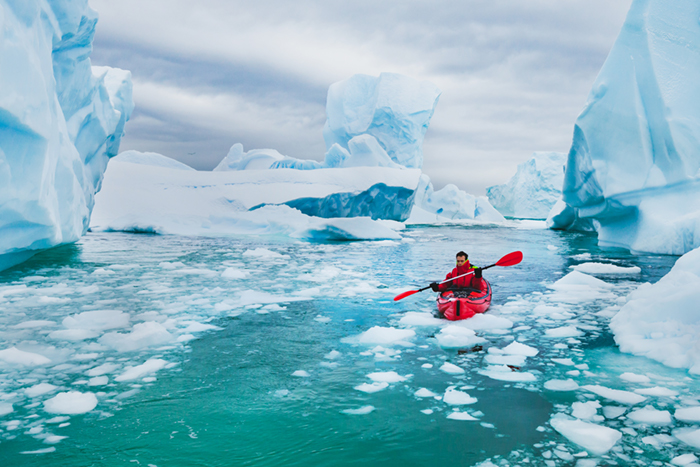 The majority of the charters explore the South Shetland Islands (including King George, Penguin and Deception islands), as well as the west coast of the Antarctic Peninsula. The region provides truly stunning itineraries, including on-land, wildlife viewing, and cruising explorations. A few of the most common activities include:

Where to Charter in Antarctica

Where will you go? From King George Island, your itinerary can take you to a number of one-of-a-kind destinations. From the splendor of Paradise Bay, to the rugged landscapes of Penguin Island, there is plenty to see and do along the way. Some of the top destinations include:

South Shetland Archipelago – Many charters originate in the South Shetland Islands. Many of these islands are ice-free, rich in wildlife, and provide relaxing and tranquil cruising. A few stops might include:

Antarctic Peninsula – The Peninsula stretches north from the mainland, and twirls its way toward King George Island. Here, you’ll find numerous inlets, glaciers, bergs and islands to explore, including:

Antarctica might not offer much in terms of flora – in fact, there are only a few species of moss and lichen that grow here – but you’d be surprised at the variety of wildlife that populate the region.

Seabirds, penguins, whales, dolphins, seals and much more roam the landscape, and that makes Antarctica a favorite destination for animal lovers.

What exactly can you expect to see? There are numerous species found in Antarctica, especially of birds. If you’re a birder, this is a must-visit destination. Plus, there’s always plenty of whales and seals to spot during your charter. Some of the species include:

Antarctica yacht charters check all the right boxes. They provide guests with unique, truly inspiring experiences. The serenity and tranquility is unrivaled, the wildlife one-of-a-kind, and the adventure can’t be beat.

Bottom line, if you’re looking for a yacht charter destination that will blow you away, Antarctica is it. Let us help you plan your exploration. Contact your broker with Worldwide Boat to learn more about your options in this rugged and beautiful destination.