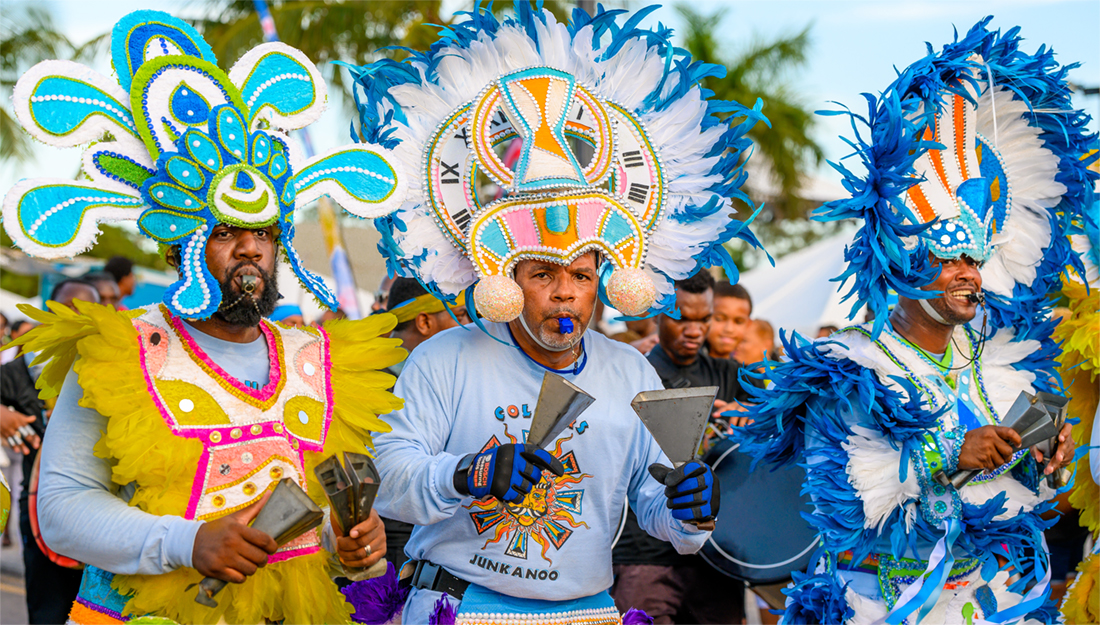 The Bahamas include around 700 islands in the Atlantic Ocean, of which about 30 have human inhabitants. In addition to people, the Bahamas are also home to many land animals, such as pink flamingos and turtles, and the waters off the coast are teeming with marine animals such as parrotfish and blue tang. Many tourists choose the Bahamas as their destination of choice to enjoy the warm temperatures, beautiful beaches, and island culture. Others come primarily for Junkanoo, an annual celebration that happens in late December and includes costume parades and carnivals.

The Bahamas are located on the far northwestern edge of the West Indies. This archipelago’s position serves as a gateway to the Gulf of Mexico, and it has a long and fascinating history peppered with stories of early discoverers trying to settle the area. The islands don’t have a lot of natural resources to export, but the beautiful landscape and pleasing weather have made the country popular with tourists. Pristine forests, sand dunes, beaches, rolling hills, and even some sizable lakes make the Bahamas an exciting area to explore, either on land or on yachts off the coast.

Indigenous peoples were living in the Bahamas for many years before white explorers found the islands. Christopher Columbus was likely the first white explorer to arrive, and he met natives who were descendants of the Arawaks. Spaniards arrived shortly thereafter, and they forced the island people into slavery. An age of piracy dominated the Bahamas from the late 1600s to the early 1700s, mainly because of the islands’ shallow waters and close proximity to shipping routes. Nassau became an important commercial port, and in the early 1700s, it was occupied by the French and Spanish navies for a time. Then, Nassau became a popular home to pirates, who quickly took over and proclaimed themselves to be in charge. In 1718, the king of England decided to restore order in the Bahamas by appointing a royal governor. After the Revolutionary War, some English loyalists fleeing the United States settled in the Bahamas with their slaves.

Party Time: When Is the Junkanoo Festival?

Junkanoo is held every year after Christmas. This national festival features music, parades, and lively celebrations. The islands host parties that start just after midnight on Dec. 26 and last into the mid-morning hours. Another celebration happens on the morning of Jan. 1. Recently, a summer celebration has been added, too, taking place in late July and August.

Junkanoo is a celebration of freedom. The actual origin of Junkanoo is not known for sure, but it’s likely that the roots of the celebration trace back to West Africa. A popular legend says that it was inspired by an African tribal chief by the name of John Canoe who fought against the Europeans before being taken captive and made a slave. Since then, people in the Bahamas have celebrated Christmas with much revelry, and Junkanoo has been an integral part of the celebration.

Junkanoo celebrations include a grand parade and street festival. Participants divide into groups of musicians, dancers, and costumers. The costumes are a prominent element, with people working hard on colorful, ostentatious outfits made from a variety of materials, including cloth, crepe paper, cardboard, and foam. The elaborate costumes are often inspired by a particular theme. Participants are judged, and groups can earn accolades for having the best costumes, best music, or best theme. Cash prizes are also awarded.

The music played at Junkanoo is perfect for dancing. Whistles, brass horns, cowbells, and drums combine to make traditional Bahamian music. Dancers fill the streets, moving to the rhythms. Acrobatic and stilt dancers are also in attendance for this festive event.

Street vendors are typically out in full force for Junkanoo, serving a variety of popular foods and drinks. Sky juice is a traditional local cocktail made with coconut milk, condensed milk, and gin. Local specialties like conch fritters and johnnycakes are also easy to come across.

Making Junkanoo costumes is a lengthy process that involves both creativity and skill. After choosing a theme, participants will make a pattern on cardboard to create the foundation of the costume. Being able to move freely in the costume is very important for dancing. Often, many layers of colored crepe paper will be glued on to create fringe. Masks are also a part of the costumes.