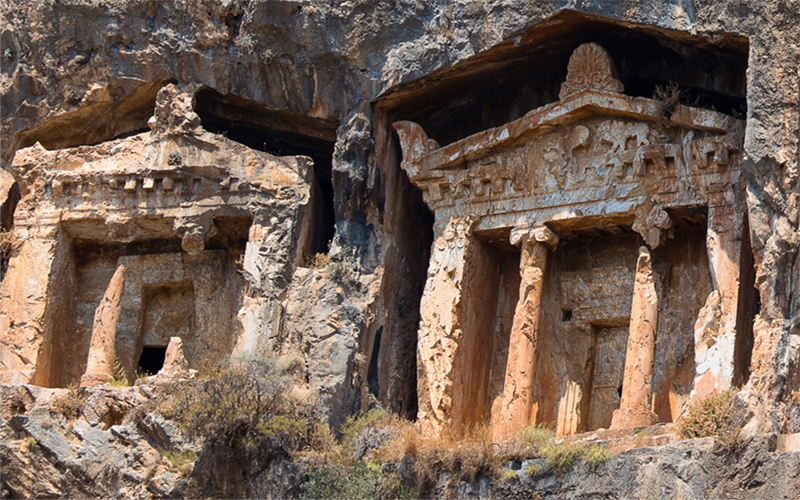 Here is a sample itinerary for an alluring Turkey yacht charter: 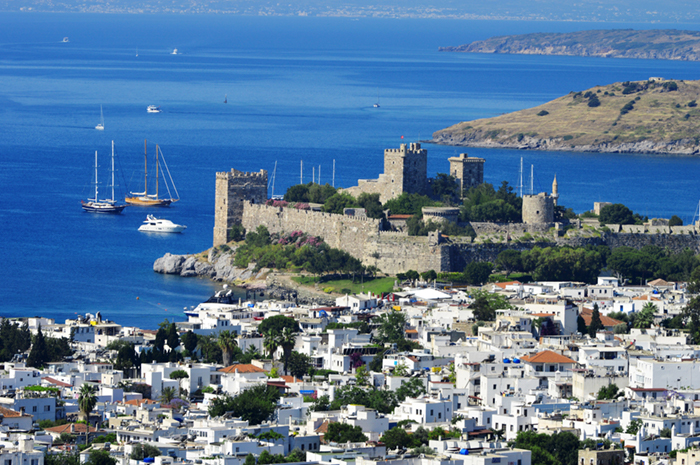 Bodrum is an enchanting town with a Bohemian vibe owed in part to the dissident artists and writers who were exiled to the area. The castle of St. Peter, built by the Crusaders, is a rich archaeological site and houses the Hall of Underwater Archeology that displays finds from shipwrecks along the coast. Bodrum is also home to one of the Seven Wonders of the Ancient World, the Mausoleum at Halicarnassus, with its pyramid and marble columns. Other impressive sites include the Bodrum Amphitheater and the white windmills. On the east side of the city is the marina and yacht club surrounded by boutiques, clubs, and upscale restaurants. 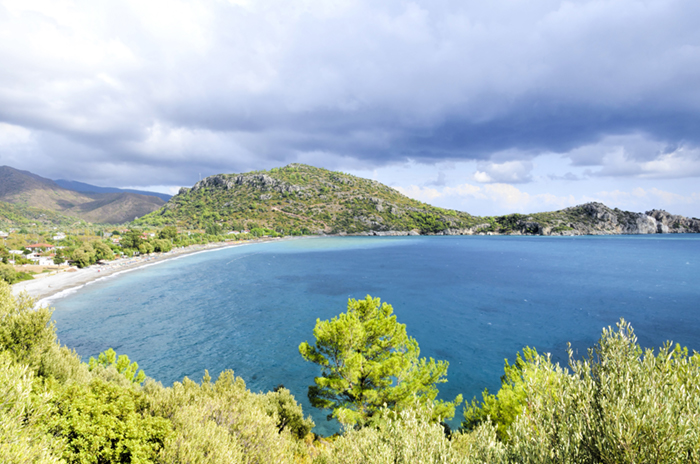 The seaside village of Datca is home to the ancient port of Knidos, a clear water cove located at the tip of the Doric Peninsula. Known as a center of art and culture in the 4th Century BC, you can wander its terraced streets while exploring the city walls, theaters, and the remains of several temples including the Temple of Aphrodite. There are two harbours where you can drop anchor before spending some time ashore. 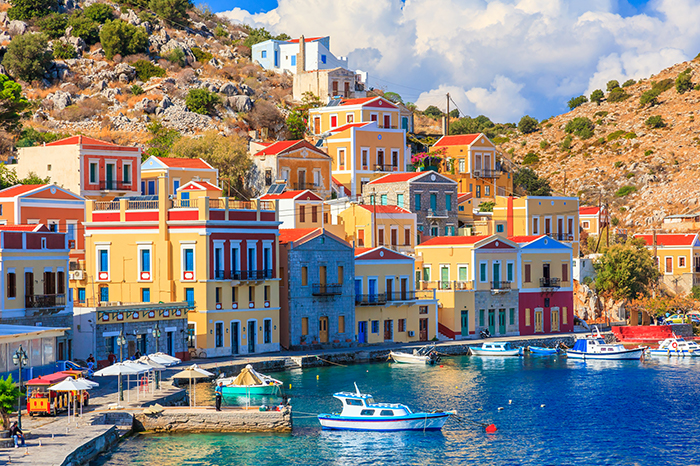 Symi is a Greek island known for its harbor town surrounded by beautiful mountains, the beaches, and its historical significance. Once a hub for the shipbuilding and sponge industries, tourism is now its main focus. Some of the sites you’ll want to see include The Monastery of the Archangel Michael Panormitis, which is still in use today, the municipal clock tower, and the Kastro, built by the Knights of St. John as part of a Byzantine castle. Symi hosts a festival each year between July and September, where you can experience open air concerts by Greek musicians, as well as dance and theater performances. 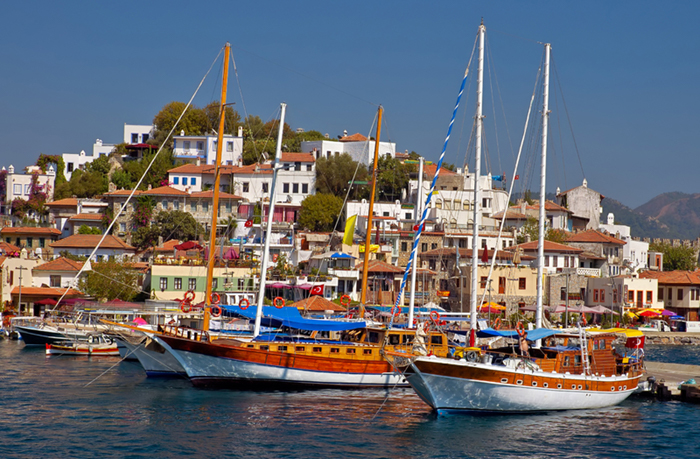 Marmaris is known as one of Turkey’s most beautiful towns and is considered the yachting capital of the country. Located where the Aegean and Mediterranean Seas meet, it has secluded coves, sandy beaches, and lush evergreen forests. It’s a popular spot for snorkeling and swimming the azure waters. Visitors can explore ancient ruins, venture inland to discover tiny villages and impressive waterfalls, or wander the many weaving alleyways of the colourful bazaar. Marmaris offers dynamic nightlife, complete with restaurants and bars. In fact, Bar Street is where you have to stop if you want to dance until sunrise. 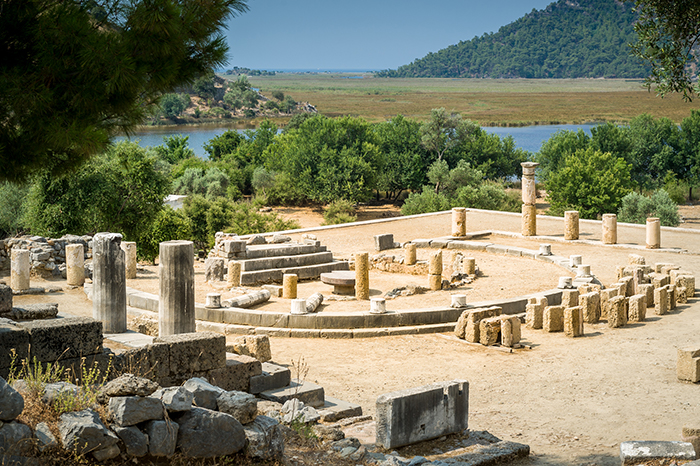 Ekincik is a charming village in itself, but it’s also the best base for exploring the Dalyan River, the ancient ruins of Kaunos, and the Lycian tombs. Not far from the city center is the Sultaniye Thermal Baths where you can luxuriate in the natural hot springs. The Beach of Iztuzu is nearby, famous for Caretta Caretta sea turtles, also known as loggerhead turtles. 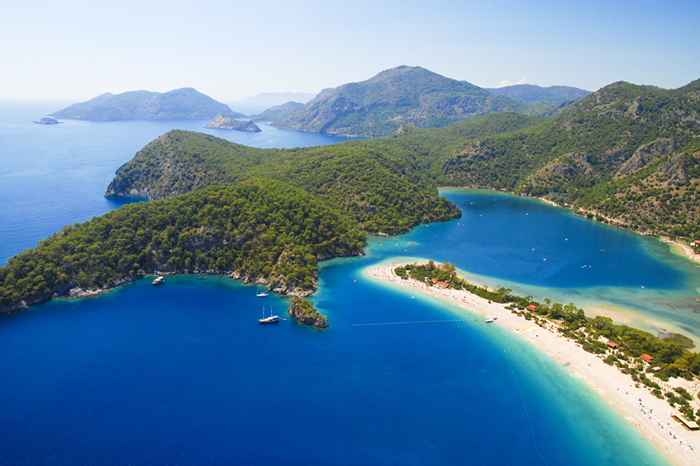 Oludeniz, also known as the Blue Lagoon, is a small village and beach resort located on the southwestern Turquoise coast. One of the most photographed beaches on the Mediterranean and ranked one of the top beaches in the world, Oludeniz is known for its pebbled shores and glistening aquamarine waters. The water is crystal clear, making it perfect for scuba diving or snorkeling. The area is also known as one of the best places in the world for paragliding from Mount Babadag which towers above the beach.

Nearby is Gemiler Island, located just off the coast of Turkey near the city of Fethiye. Anchor at its crescent-shaped bay and explore the ruins of several churches built between the 4th and 6th Centuries AD. Archeologists believe this is where the original tomb of St. Nicholas was located.

The Gulf of Fethiye holds many places to explore. The port town of Fethiye has a lagoon, marina, Roman amphitheater, and the Lycian tombs in the surrounding hills. Manastir Bay, also known as Cleopatra’s Baths or Sunken Bath Bay, holds the legendary baths once used by Cleopatra. The ruins are semi-submerged, and you can explore them either by tender or by snorkeling.

The island of Tersane, once known as Telandria, was the dockyard of the Ottoman fleet during World War I. Once inhabited, you can see the remains of houses and churches. The people who once lived on the island dealt in livestock and fruit; in fact, fruit is still grown here to this day, and you may come across herds of goat.

Gocek and its lively port is considered by many yachters as one of the best sailing destinations in the Mediterranean. Located at the foot of pine-fringed mountains and overlooking Gocek Bay, this spot is famous for lavish resorts, exquisite restaurants, unique shops, and vivacious bars. The weather is beautiful, and the natural surroundings are breathtaking. Stop in one of the secluded anchorages and spend the afternoon enjoying watersports in the clear, warm water, and then sunbathe on a sandy beach. At night, enjoy a delicious meal followed by some music or dancing.