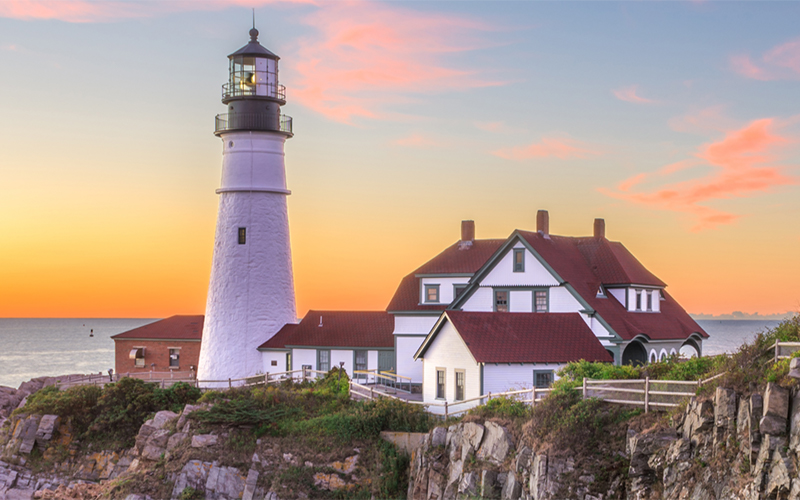 10 Most Beautiful Lighthouses in New England

New England is rich in seafaring history, and all across the region, you’ll find opportunities to explore this unique past. But one of the best ways is by touring New England’s many lighthouses while on your luxury yacht charter in New England.

Portland Head Light isn’t just one of New England’s most beautiful; it’s also one of the oldest. The lighthouse, which is situated on the rocky shoreline of Fort Williams Park, was built in 1791, and here you’ll be treated to sweeping views of Casco Bay. At just over 80 feet in height, Portland Head towers over the bay, a truly striking structure. If you go, be sure to take the tour and visit the old Keepers’ Quarters. Here, you’ll find a range of artifacts, photos, and maritime history.

One tip: Fort Williams Park surrounds the lighthouse, and it’s a perfect destination for hikers. Hike in the park – the Cliff Walk offers sprawling views of Portland Head Light — and be sure to bring your camera! It’s especially beautiful in fall. 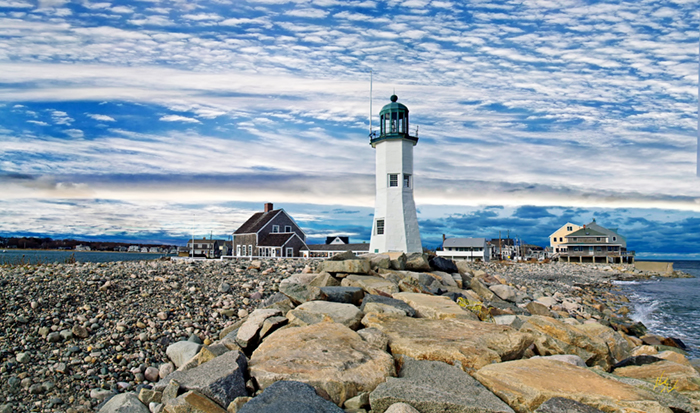 Just 25 miles from Boston, Scituate is equal parts beautiful and historic. The lighthouse was originally constructed in 1811, and the original structure and keeper’s quarters in the United States. That makes it one of the country’s oldest complete lighthouses.

The lighthouse has been meticulously restored and preserved since the 1990s. In fact, it sat vacant for more than a decade – 1860 to 1994 – until a local historical society launched an effort to relit and restore the building. The lighthouse is particularly beautiful from the boulder jetty, which makes for incredible sunset pictures.

Perched atop the striking Aquinnah Cliffs – a popular cycling destination on Martha’s Vineyard – Gay Head Light is open seasonally. And it’s one of three lighthouses in operation on Martha’s Vineyard. When you visit, be sure to leave plenty of time for hiking. The Aquinnah Cliffs area offers amazing views, and be sure to climb down to the beach below. The lighthouse is open seasonally for tours.

Southeast Light towers above the picturesque Mohegan Bluffs on Block Island. The bluffs, which tower 150 feet over the Atlantic, are a popular hiking destination on the island, and they provide an amazing backdrop for the Gothic Revival Southeast Light.

One bit of history: The bluffs have long suffered erosion, and for many years, the lighthouse kept getting closer and closer to the edge. In the early 199s, a group of local preservations raised money to move the lighthouse back 300 feet, to where it sits today. A quick tip: Mohegan Bluffs Beach, which sits below, is one of New England’s best; be sure to take the 140 steps down to the beach. 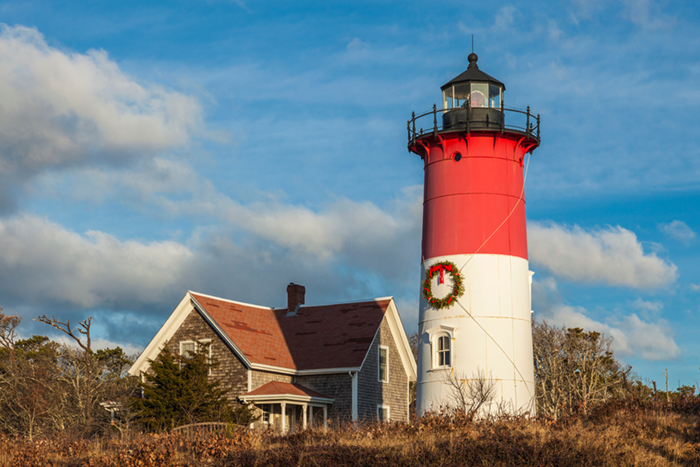 Nauset Light might be the most recognizable one on this list. The reason? The lighthouse is featured prominently on bags of Cape Cod Potato Chips. The unique red-and-white lighthouse was built in 1887, and it sat perched in the same location for more than 100 years. Due to erosion though, Nauset had to be moved in the 1990s; it’s now located about 350 feet back from where it originally stood.

You can take a self-guided tour of the lighthouse during open houses throughout the year. This is one of Cape Cod’s must-see lighthouses!

Located on Cape Ann’s rocky shoreline, Eastern Point Lighthouse is located in the middle of a wildlife sanctuary. And as such, it’s surrounded by natural beauty. The lighthouse, which was originally established in 1832, is currently run by the U.S. Coast Guard. On the grounds, you’ll also find the historic keeper’s quarters, built in 1879, the oil house, a garage, and a fog signal building.

The lighthouse also has a claim to fame. It was featured in the George Clooney movie The Perfect Storm. 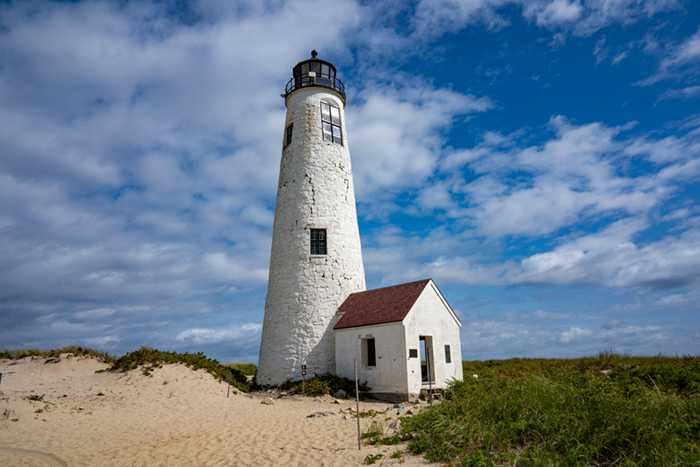 Officially known as Nantucket Light, this historic lighthouse on the island’s northernmost point isn’t actually very old. In fact, the original stone tower, which was built in 1817, was toppled by a storm in 1984. The current tower was built two years later and designed to look like the original.

Great Point Light is situated amongst the beachgrass and dunes of Coskata-Coatue Wildlife Refuge, an absolutely gorgeous backdrop. This one is a little tough to reach; your best bet is an ATV tour to traverse the dunes.

The Bass Harbor Head Lighthouse is perched atop a granite cliffside in Acadia National Park. The lighthouse is quintessential Maine – a rocky coastline, a pine-tree backdrop, and big skies. The historic lighthouse has long marked the entrance to Bass Harbor on Mount Desert Island. The brick lighthouse was built in 1858, and it’s a popular destination on yacht charters in New England.

Marking the entrance to Portsmouth Harbor, this lighthouse is New Hampshire’s only mainland light and sits on the site of a Revolutionary War fort. It’s one of America’s only pre-war-built lighthouses, and it’s known for being haunted. In fact, the TV paranormal investigators from Ghost Hunters have visited the location to explore its storied past.

Petit Manan Light is located on the rocky island of Petit Manan, a short sail from Bar Harbor. Not only is it one of the most beautiful; it’s also one of the tallest. Petit Manan’s grey granite tower is 119 feet tall. On site, you’ll see several historic outbuildings, including the original keeper’s quarters (built in 1875). This lighthouse isn’t open for public tours; the best way to see it is by boat.

New England offers so much for yacht charter guests to do: Hiking, biking, beautiful beaches, food/drink, historic and much more. But of all the scenic beauty of the region, nothing epitomizes New England quite like the lighthouses. Where will your adventure take you?