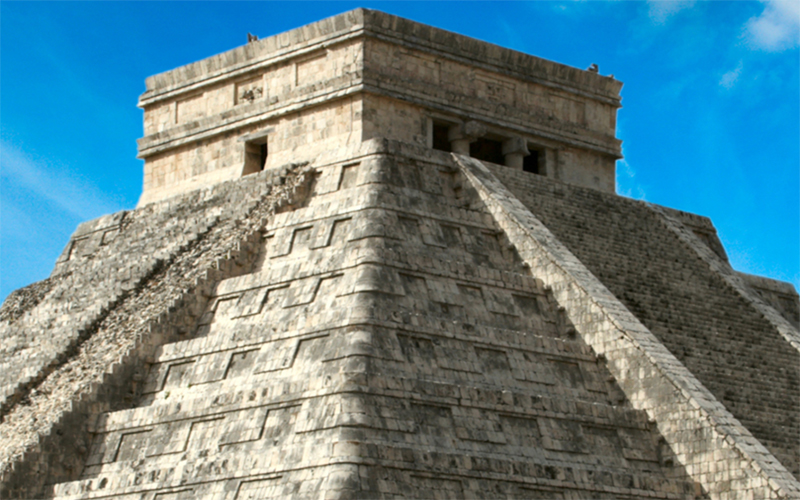 All over Mexico, you’ll find evidence of ancient civilizations, including well-preserved ruins and massive pyramids. Yet, if you’re on the hunt for pyramids, head to the Riviera Maya. The Yucatan Peninsula and areas around Cancun are home to some of Mexico’s best ruins. Not to mention, the pyramids here sights to behold.

From the iconic Temple of Kukulkan – one of the Seven Wonders of the World – to the towering pyramids of Coba, the Riviera Maya offers the best chance to step back into history and explore the fascinating Mayan culture. Need some help planning your trip? These are six can’t-miss pyramids and ruin sites in Mexico.

Where to See Pyramids in Mexico: 6 Best Sites

Chichen Itza might be Mexico’s most famous ruin site, and that’s in no small part of its proximity to Cancun. The location is also one of the largest, as the ruins cover more than 700 acres. Today, Chichen Itza is a designated UNESCO World Heritage Site, as well as one of the Seven Wonders of the World.

One of the most impressive structures is the Temple of Kukulkan, or El Castillo. Towering nearly 100 feet above the ground, the limestone pyramid lies in the center of Chichen Itza, and was constructed to honor Kukulkan, a Feathered Serpent deity of the Mayan culture. The temple’s location has astronomical significance, as well. At the spring and fall equinoxes, the sun casts triangular shadows off the steps, which resembles a feather snake descending the stairs.

Coba was an important Mayan city, serving as a trading hub for the peninsula. That significance is evidence by Coba’s network of more than 50 limestone sacbes, which were trading routes that pointed out in all directions. Today, visitors can travel along 16 of these streets by foot or bicycle (although bicycle makes the most sense as the site sprawls for more than 30 square miles.)

The most significant pyramid here is Nohoch Mul. At nearly 140-feet, Nohoch Mul is the second-largest pyramid in Mexico, and it’s also one of a few pyramids that visitors can climb. After ascending the pyramid’s 120 steps, visitors are rewarded with panoramic views of the jungle, the twin lagoons of Coba and the surrounding ruins.

The ancient city of Uxmal served as an important trading center for the Mayans. In fact, nearly 25,000 Mayans lived in Uxmal during its height in 1000 A.D. Today, Uxmal offers visitors the best examples of Mayan architecture, as many of the structures remain intact and well-preserved. This is also one of the Riviera Maya’s many UNESCO World Heritage Sites.

The pyramid is a great example of the Mayan’s interest in astronomy. On the summer solstice, the setting sun aligns perfectly with the structure’s stairs. Although you can’t climb the Pyramid of the Magician, there are several structures in Uxmal that you can climb, which offer impressive views of the scenery.

Located just 35 miles from Chichen Itza, Ek Balam is an impressive ruin site. But it’s lesser-known and rarely draws crowds. If you’re looking for a quiet place to experience Mayan culture, this is it. On the site, there are many structures you can climb, including the massive Acropolis.

Built for the city’s ruler Ukit Kan Lek Tok, the Acropolis towers at just over 100 feet. From the top, visitors can glimpse the temples at the nearby ruin sites of Chichen Itza and Coba.

Calakmul is another lesser-known Mayan site, but it’s also one of the largest and most impressive. You’ll have to journey into the jungle outside Campache to reach it, but it’s well worth the trip. Known as the Kingdom of the Snake, Calakmul is home to several pyramids and more than 6,000 structures.

The city was discovered in the 1930s, as explorer Cyrus Lundell recognized the adjacent pyramids while passing over in an airplane. The two main pyramids are called Structure 1 and Structure 2, and they’re some of the largest pyramids on the peninsula, measuring nearly 150 feet in height.

Although Tulum isn’t well-known for its pyramids, the site is one of the most beautiful in all of Riviera Maya. A walled city, Tulum was an important fortress built right on the turquoise Caribbean Sea. After exploring the site, many visitors cool off at the nearby beach.

Tulum was a trading center for turquoise and jade, and was believed to be walled to protect from invaders or to house nobility. At Tulum, the largest structure is the Castillo. Perched atop a 40-foot limestone cliff overlook the Caribbean, the Castillo measures just 25 feet tall, but has world-class views of the beach.

Explore Mayan ruins on your yacht charter in the Riviera Maya. Let us help you plan your Mexico yacht charter. Contact a broker with Worldwide Boat today to learn more about our options in the region.