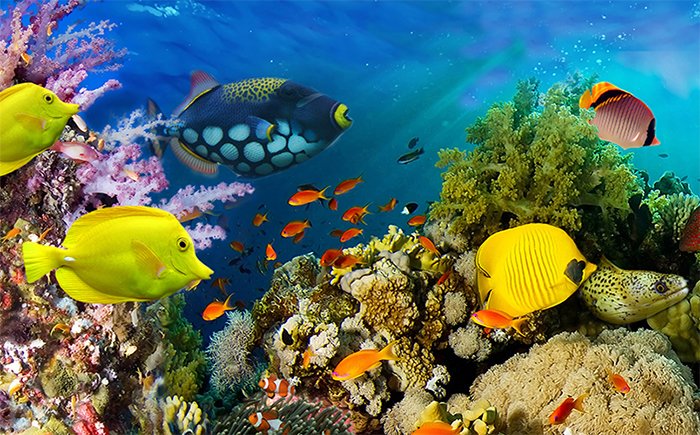 Marine Life in the Maldives

The white-sand atolls of the Maldives might be best known for their luxury resorts and beautiful beaches. But just off shore, you’ll find a dazzling array of exotic marine life and colorful reefs.

In fact, there are more than 2,000 species of fish, as well as rays, sharks and turtles in the waters around the Maldives. That makes the area one of the best destinations for snorkeling and diving in the world, and a favorite spot for luxury yacht charters.

Wondering what types of aquatic wildlife you might see? This short guide features it all, including top Maldives snorkel spots and an overview of the Maldives marine life.

The warm waters of the Maldives are known for their biodiversity. Dozens of coral species, an array of colorful tropical fish, moray eels, rays, and giants like tuna, dolphins and whale sharks all call the waters around this string of islands and atolls home.

Some of the top Maldives marine species include:

More than 2,000 species of fish call the waters home, and you’ll find a range of species, from small reef dwellers, to large hunters. Some of the most prevalent include guitarfish, a flat species known for their guitar-like shape, brightly colored triggerfish, and porcupine fish, which puff up and show spikes when frightened.

Larger species and rays are also abundant. In fact, the national animal of the Maldives is the yellowfin tuna. Some of the larger species include trevally, grouper and barracuda, as well as manta rays, fantail rays and whip rays.

The Maldives is home to 23 species of cetaceans, ranging from bottlenose dolphins, to blue whales. One of the most abundant species is the spinner dolphin, which comes to rest in the waters near shore of North and South Male Atoll in the morning. Yet, there are numerous dolphin species, including striped dolphins, bottlenose dolphins and pantropical spotted dolphins.

Whales aren’t quite as abundant, but there are many species that have been observed including the Bryde’s whales, false killer whales, and sperm whales.

Although the Maldives are home to about 14 species of shark, the whale shark is a top attraction. One of the largest species of fish, over 30 feet in length, there are many opportunities to swim with whale sharks in the Maldives, which is part of the reason this is such a revered snorkeling destination. South Ari Atoll is one of the best destinations for whale shark sightings. Other shark species include reef sharks (black tip and grey), as well as white tip sharks and tiger sharks. 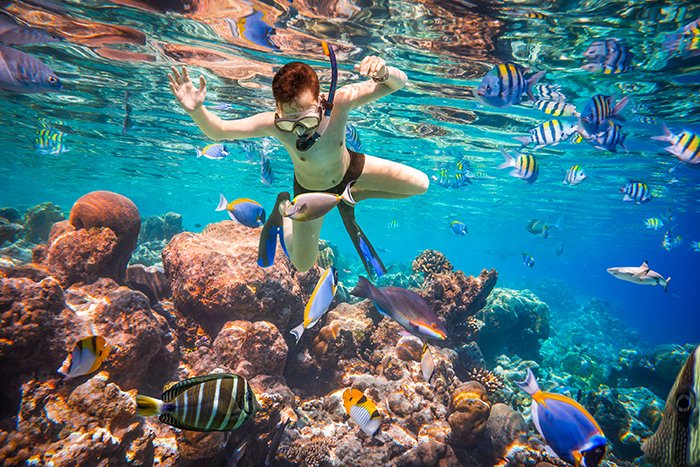 Many yacht charters in the region spend time around these spots, as the diving and snorkeling is some of the best in the world.

Banana Reef
The capital city of Male and the North Male Atoll are home to one of the country’s oldest and most abundant reef systems. Known as Gaathugiri, or the Banana Reef, due to its curved shape, the reef offers both shallow and deep areas, as well as topographical features like cliffs and caves to explore.

The reef is revered for its bright, colorful corals, which are home to numerous species including triggerfish and butterfly fish. One of the best dive spots is Lankan Manta Point, where manta rays are abundant between May and November.

Angsana
One of the best house reefs, just north of Baros, Angsana is known for its shipwreck, the Rannamaari. A former sand dredger that was commissioned to sink, the wreck site is home to schools of fish now, including batfish, glassfish, squirrelfish and giant moray eels.

HP Reef
The HP Reef, known locally as Girfushi Thila, dazzles with its bright collection of soft corals. In fact, it’s often called the Rainbow Reef, thanks to all the colorful corals. The reef is easily accessed from North Male Atoll, and it’s home to a range of reef fish, including triggerfish, rainbow fish and glassfish, as well as larger species including reef shark, eagle ray and barracuda.

Cocoa Corner
South Male Atoll doesn’t draw the crowds like North Male, and it’s reefs are a bit more challenging for divers. One of the top spots is Cocoa Corner, a deep-water cliff that features many ravines, caves and channels. The reefs around South Male are known for the larger shark species that hang out there, as well as the beginner wreck dive Kuda Giri.

Hammerhead Point
This region is known for its underwater pinnacles, known as thilas, and the area is home to a diverse array of dive sites. One of the best is Hammerhead Point, where divers go to catch a glimpse of hammerhead sharks, and the Fish Head thila puts on a colorful display with a range of hard corals and tropical fish to see.

Maamigili Marine Protect Area
If you want to swim with whale sharks, South Ari is the place to go. The friendly whale sharks are abundant in the Maamigili Marine Protected Area year-round, as well as the Dhidhdhoo Beyru Feru area. This area is best reached by divers, but there the house reef around Sun Island does offer snorkelers a chance to spot these peaceful giants.

Plan a Maldives Yacht Charter to Explore the Marine Life 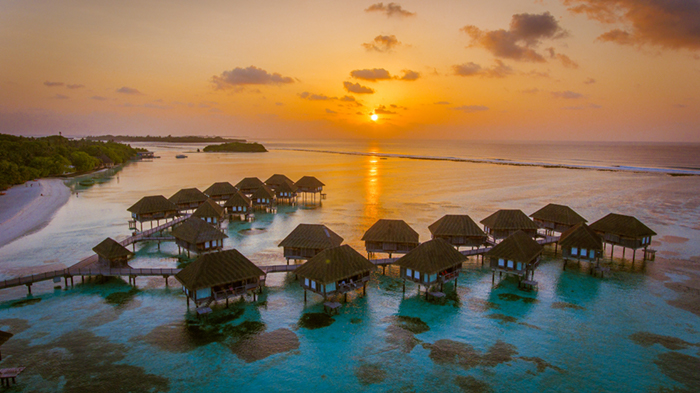 The Maldives offer it all: Stunning natural beauty, sparkling beaches, and of course, incredible snorkeling and diving adventures. A luxury Maldives yacht charter offers the best chance to explore the region’s rich reefs. Some spots to include in your itinerary include:

North Ari Atoll – Home to Hammerhead Point, as well as numerous house reefs and pinnacles, North Ari is perfect for snorkelers, yet there are many shallow- and deep-water dive sites to explore as well.

South Ari Atoll – With its nearby protected marine park and population of whale sharks, South Ari is a perfect destination for glimpsing gentle giants.

Baros – The island is known for its luxury resorts, and abundant house reefs. This is a great spot for beginners and experienced snorkelers and divers alike.

Book your Maldives luxury yacht charter with Worldwide Boat. Contact your broker today to learn more about snorkeling and diving in the Maldives.