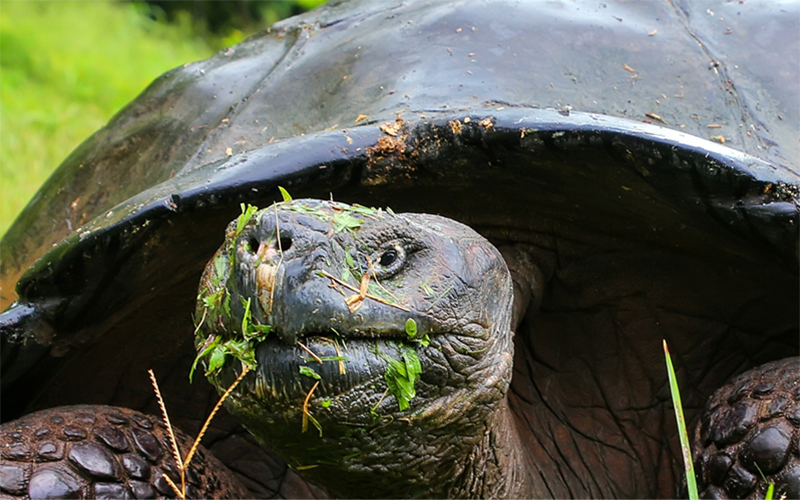 Where to See Galapagos Tortoise

The Galapagos Islands are a nature lovers’ paradise. On each of these stunning volcanic islands, visitors are welcomed by one-of-a-kind wildlife encounters.

But there’s one animal that ranks high on almost every visitors’ must-see list: the Galapagos tortoise.

The giant tortoises of the Galapagos are one of the region’s iconic inhabitants. In fact, they were once so prevalent here that they inspired the archipelago’s name (“galapago” is Spanish for tortoise). Although the tortoise isn’t as abundant today as it was during Darwin’s visits, you’ll still find many different opportunities to encounter the 10 species of tortoise that call the islands home.

Where should you go to see the Galapagos tortoise? These are some must visit islands as well as places to go to see these one-of-a-kind, loveable creatures.

Santa Cruz is one of the most visited islands in the Galapagos. And that makes sense. The Charles Darwin Research Station is located here, and this is one of the best spots to experience tortoise. Conservation efforts take place at the station in the Rausto Llerena Breeding Center, and visitors can glimpse newborn tortoise as well as breeding pairs here. If you’re interested in the history and evolution of tortoise, the Breeding Center is the best source of information.

On Santa Cruz, you’ll also want to visit the highlands. There are several farms and reserves that provide shelter for giant tortoise in the more mountainous regions. A few places to go include:

San Cristobal once was home to two large populations of tortoise on either end of the island. Today, though, the islands’ tortoises – about 1400 animals – reside in the northeast corner in the Galapaguera de Cerro Colorado nature reserve.

The reserve is reachable only by boat, which makes it a great destination for yacht charters. Plus, it draws much fewer tourists than other locations. That makes it great for a quiet, off-the-beaten-path adventure. To see the tortoise, you can tour the park on a 6-mile roundtrip hike.

As the largest island in the Galapagos, Isabella is home to the region’s largest and most biodiverse population of tortoise. One reason is the island’s diversity of terrain and habitats. Today, there are five distinctive species on the island. For the island’s best experience, head to the Giant Tortoise Breeding Center.

The center is one of the best in the Galapagos, as it allows hands-on learning and up-close encounters with these majestic reptiles. You’ll see tortoise of all sizes and species, from day-old babies to decades-old studs.

Floreana Island was once home to its own unique species. Today, though, the tortoises that populate the island are a cross of San Cristobal and Floreana tortoise. In the 1930s, as resorts and hotels were being built, San Cristobal tortoise were introduced on the island, and the new subspecies was born.

Today, you can still see many tortoises on Floreana in the wild. In particular, head to the highlands and foothills. A great location is Asilo de la Paz, a natural heritage site and ranch. Asilo is where the first humans settled on the islands, and today, you’ll find pristine forests, hiking trails and caves to explore, as well as a small population of giant tortoise.

Plan your wildlife adventure in the Galapagos now. A private yacht provides access to all of the islands’ prime tortoise viewing habitats. Contact your broker with Worldwide Boat to learn more about our Galapagos yacht charters.