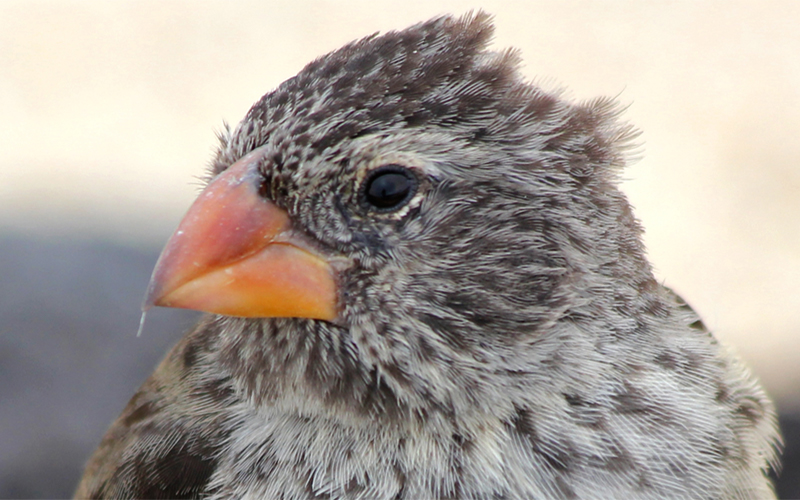 Most of us learned about Darwin’s Theory of Evolution in grammar school and remember a few key details. But one fact we might not remember is the exact species that helped solidify Darwin’s theory.

Not sure? It was the Galapagos finch. The finch is a species of small bird that’s distributed widely across the islands of the Galapagos, but this little bird had big implications for Charles Darwin’s theory.

During Darwin’s travels around the Galapagos Islands, the famed naturalist identified a species of finch that had adapted from island to island. The finches were all similar in size, color and shape. Yet, from island to island, the species had distinctive mutations – primarily in beak size/shape. In other words, one single species had evolved into several unique subspecies.

Today, the Darwin finches of the Galapagos are a must-see attraction for naturalists and adventurers visiting the islands. Want to see the finches on your yacht charter in the Galapagos? Here’s everything you need to know about Darwin’s finches.

Why Did Darwin’s Finches Adapt?

The finches played an integral role in Darwin’s theory of evolution, and that’s because they helped illustrate the principles of natural selection.

Natural selection is the process by which animals that are best adapted to their environment tend to survive and thrive, e.g. survival of the fittest. In the case of Darwin’s finches, the subspecies all evolved from a single species, the Blue-Black Grassquit Finch, which is native to the coasts of South America. That’s why all of the finches are similar in size, color and habitat.

But there’s one key difference amongst subspecies: The finches have different beak sizes and shapes.

Why is that so important? The finches evolved to the available food sources on each island. For example, the Ground Finch, which is native to 10 islands, has a crushing beak, as its primary food source is hard seeds. The Cactus Finch, on the other hand, has a probing beak, which allows the bird to reach insects that burrow inside of cacti. Ultimately, over generations, several unique subspecies evolved, and today there 14 species of Darwin finch.

The first finches arrived in the Galapagos nearly 2-3 million years ago, straying from the coasts of South and Central America. The finch has evolved, thusly, over millions of years, and today, there are a wide variety of species. Here are some interesting facts:

Where to See Darwin’s Finches

A trip to the Galapagos wouldn’t be complete without a birding hike or two. To find each species, you’ll have to know where to look, as some have very specific ranges. The Medium Tree Finch, for example, is native to Floreana, while the Cactus Finch can only be found on Espanola and Genovesa. Some of the best bird-viewing locations on the islands include:

Set sail on a once-in-a-lifetime adventure in the Galapagos. Book a private Galapagos yacht charter! Talk to a broker with Worldwide Boat today to learn more about our amazing itineraries and yachts for hire in the region.