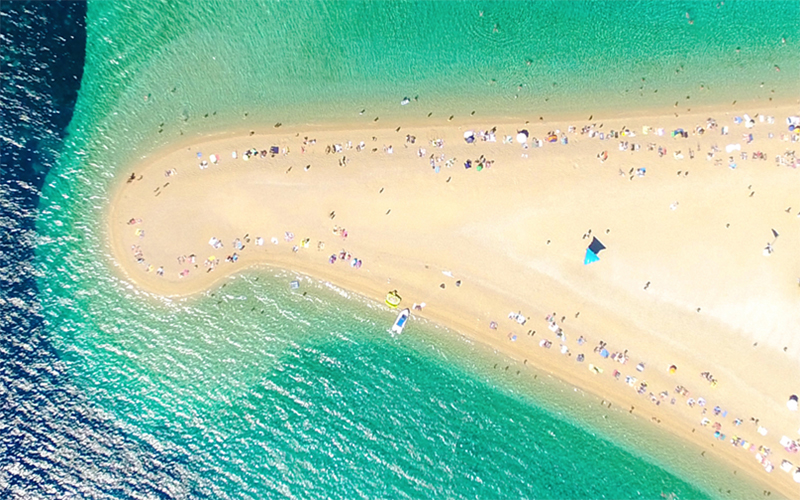 A day at the beach on the Adriatic Sea is unlike any other place in the world. When you’re in the mood for a day on the sand in Croatia, it’s best to head south and anchor along the Dalmatian coast; where yacht charter guests will find seductive shores, pebbly coves and warm, sun-kissed rocks.

Of course, Croatia has plenty of enchanting beaches to choose from – so here are our top five favorites to visit:

On the tiny island of Susak, sunbathers will find desert-like terrain, shallow bays, and the quaint, aptly-named village of Susak. Just a ferry ride away from Mali Losinj, the main beach, Spiaza, is narrow, but long; stretching out from the small village and offering breathtaking views of the horizon beyond.

For a rejuvenating beach escape with a drink in hand, there’s no better place to be than Nin. Equal parts long and luxurious, its main stretch of sand, Kraljičina Plaža – or “Queen’s Beach” – is home to whimsical mountain views, a few beach bars, and plenty of peloid mud; a natural mineral treatment for poor joints and achy muscles.

With its clear waters, sandy shores and plentiful olive groves, this bay paints an enchanting picture of Medieval history. Home to the remnants of a Medieval church, and very little parking, this beach is quieter than most; but provides the perfect respite from a busy day and throngs of people.

Known for its chic bars and scandalous nightlife, the Renaissance port of Hvar is a good starting point for any beach escape. When it’s time to get some sun, however, head outside of Hvar – the eastern coast of the island has Uvala Dubovica, a broad pebbly beach that sits next to a beautiful, iconic manor house. Popular for yachters and boat aficionados alike, this area boasts shallow bays that are perfect for swimming, and of course, those stunning Adriatic Sea views.

With a name that means “Golden Cape” in English, Zlatni Rat is a silvery strip of land that stretches into the aquamarine waters of the Adriatic Sea. Since it’s a popular destination, it can get crowded; but its pebbly beach, shallow bays and picturesque views make it worth braving through them.