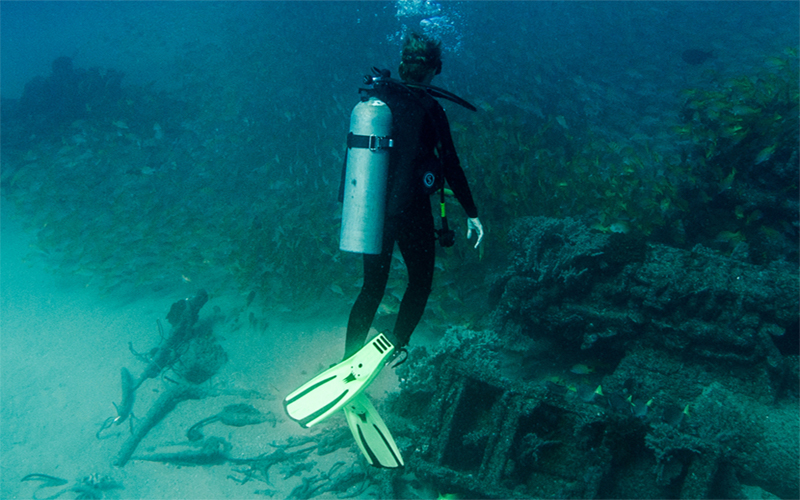 Best Diving in the Leeward Islands

The Leeward Islands are located where the northeastern Caribbean Sea meets the western Atlantic Ocean. They are named for the trade winds in the area that blow from the east. Some excellent dive sites are situated in the Leewards, and we have recommendations on some of the best ones to visit while on your yacht charter in the Caribbean!

Located between St Kitts & Nevis and Anguilla is the island of Saba, and the Saba National Marine Park, a protected area that has been a veritable playground for divers since 1987. The island’s volcanic beginnings resulted in formations unlike anywhere else, making it one of the best places to dive in the Caribbean and the world. Today, ecotourism is a large part of the island’s economy, especially dive tourism. Below the surface, among the coral reefs and sponge walls, you’ll encounter schools of colorful fish, sharks, and other creatures that are not typically seen by divers. Diving is available year-round although water temperature, visibility and surface conditions vary from season to season. The coastal zone is quite steep, so shore diving is not possible, but there are 25 dive sites accessed via boat, each with its own distinct features.

The Pinnacles spring from the ocean floor and rise up to 100’ and are surrounded by abundant fish life including turtles, large groupers, jacks, and sharks. The Eye-of-the-Needle is the structure you’ll want to explore.

The spires at Wells Bay and Torrens Point form a protected cove that is ideal for snorkeling or shallow diving, with underwater caves and tunnels. Divers will encounter blue tangs, goatfish and parrot fish in this area. Man ‘o War Shoals and Diamond Rock are submerged and semi-submerged extensions of the Torrens Point headland, with depths of up to 80’, allowing divers to explore the ocean bed and abundant marine life. You’re likely to see black triggerfish, barracudas, black-tip sharks, and stingrays here.

The Ladder Bay area includes the original steps that Sabans used to access the island before the Fort Bay Harbour was built, known as The Ladder. Dives in this area allow you to see the island’s volcanic origins, where you can swim through the labyrinth created by the lava flow. Large boulders and grey sand are surrounded by brightly colored coral and curious barracudas.

St. Kitts has excellent diving spots, whether you’d like to explore lively reefs or hulking shipwrecks. The wreck of the River Taw sits in 50’ of water and has excellent conditions to view corals and reef fish. The Talata, which sunk in 1985, sits in 70’ of water, and many reef fish have made it their home. The Brassball Wreck is a shallow dive and snorkeling destination, perfect for new divers.

Reef dives in the area are diverse and abundant. The Vents is one of the most unique, with black and wire coral that has hot water vent holes. Coconut Tree is one of the largest reef areas off St. Kitts, starting at 40’ below the surface and plummeting to 200’. Nag’s Head is a reef that sits at 80’ where the Caribbean Sea and Atlantic Ocean meet. It’s recommended for experienced divers due to the strong currents, but it also has a wide range of sea life. Brimstone Shallows ranges from 45’ to over 100’, and includes a wall, colorful schools of reef fish, and at times, reef sharks.

Monkey Shoals is a large atoll of coral nestled between St. Kitts and Nevis, with several dive areas within the one square mile area. It is known for excellent visibility and mild currents. Divers will see angelfish, turtles, snappers, lobsters, and possibly nurse sharks. Nearby is Coral Gardens, a drop off with large formations of hard and soft corals.

The Moon Shadow reef off Sandy Point Town is a popular spot. Filled with long finger coral, it gives divers a sensation of diving through tunnels filled with fish, turtles, and brightly colored nudibranch slugs. There is also wall that ranges from 50’ to 130’.

This uninhabited island, located between St. Barts and St. Martin, is one of the Leeward’s best anchorages, with fantastic reef diving on its south and west sides. Under water, you’ll find many species of fish, several types of rays, nurse sharks, barracudas and sea turtles.

St. Barts has two main dive areas, Pain de Sucre and L’Ane Rouge. Pain de Sucre is an islet just off Gustavia Harbor. The massive rock pinnacle spans from 70’ below the surface to 50’ above. Divers will spy blue tangs, sergeant majors, and chromis fish, as well as the occasional sea turtle or eagle ray. L’Ane Rouge is just off Colombier Bay, a spot popular with divers looking for sea turtles.

Anguilla has several calm bays and beaches that are ideal for snorkeling, and marine parks that attract divers from around the world. Among the areas that snorkelers can explore are Crocus Bay, Shoal Bay, Sandy Island and Little Bay, and swim among blue tangs, parrot fish, and sea turtles. Scuba divers flock to the marine parks – including Dog Island, Prickly Pear, Seal Island, Sandy Island, and Shoal Bay Harbor – where they can go on wall dives, ledge dives, and wreck dives. The Steps at Scrub Island is a notable dive site, with dramatic underwater rock formations like large boulders and a dramatic ﬁve-foot arch.

Stoney Bay Marine Park is Anguilla’s ﬁrst underwater heritage site, home of the El Buen Consejo that sunk on July 8th, 1772 on its way to Mexico to convert the inhabitants. She carried Franciscan priests, general provisions and livestock, plus thousands of religious medals. All passengers made it to shore. Underwater archeologists have logged the artifacts, and divers can explore the ship’s cannons, anchors and even the devotional medals that are embedded in the coral on the ocean floor. Other wreck dives in Anguilla include the Commerce, the Oosterdiep, and the Sarah.

Statia is a volcanic island with a naturally deep harbor, and a great wreck dive off its shores: the Charlie Brown. This 320’ vessel is now an artificial reef where various fish, lobsters and the occasional turtle play. Venture deep into the ship’s hull and see what treasures await.