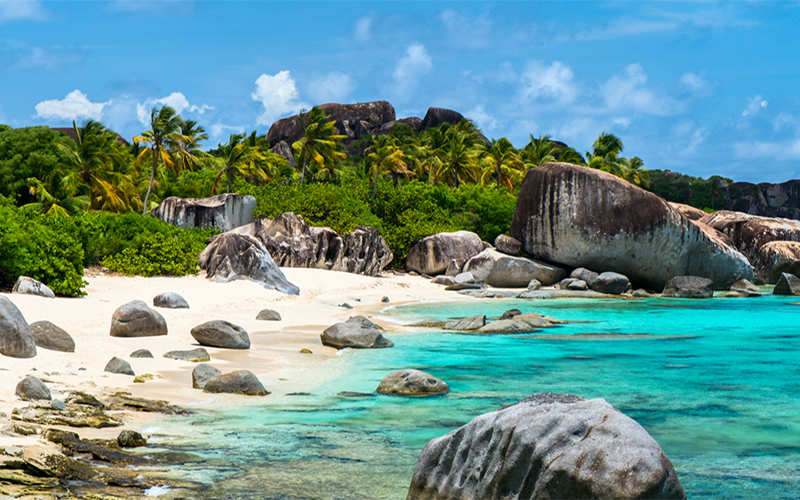 If your idea of paradise isn’t complete unless there’s a new adventure around every turn, then a Virgin Gorda yacht charter is your perfect vacation choice.

The third-largest island of the BVI chain, Virgin Gorda has enchanted visitors since Christopher Columbus first set his gaze on it in 1493. In fact, it was Columbus who christened it “Virgin Gorda” because it resembled a “Fat Virgin” lying on her side. Surrounded by serene waters and studded with immaculate beaches, exclusive yacht clubs, magnificent landscapes, historic ruins, and geographic formations beyond compare, Virgin Gorda offers the right mix of luxury and seclusion.

An eclectic blend of influences, including Spanish, African, Dutch, and British, have shaped Virgin Gorda’s food, arts, and culture. Rich history combined with their primary industries — fishing and tourism — are at the heart of this island’s identity.

Things to do on Virgin Gorda

A unique site on Virgin Gorda is The Baths, in a National Park located along the rocky shoreline at the southwestern tip of the island and it one of the most desired stops for yacht charters in the BVI.

Unlike anywhere else in the Caribbean, this exotic geological attraction consists of sheltered sea pools and grottos created by massive granite boulders that rest along the white sand beach. Hidden rooms are lit up with sunlight and snorkelers enjoy the many caves and coral ledges.

This natural marvel was created by ancient volcanic activity, when molten rock seeped up into the existing rock layers. Many flock to The Baths to see these majestic rock formations, but there is so much more encompassed by this National Park. The protected area also includes Devil’s Bay, which can be accessed from The Baths by a series of ladders scaling the boulders, and Spring Bay, which is reached by a separate road and includes a pristine white sand beach.

Devil’s Bay is a popular day anchorage that’s perfect for swimming and snorkeling. It has a coral sand beach set against sparking blue water. One of its main attractions is a beautiful cave submerged in 12 feet of water, where colorful sponges and corals decorate the walls. An offshore dinghy dock reduces crowding around the beach, and mooring buoys protect the reef from anchor damage. Facilities available to guests include bathrooms and lockers.

To the east of The Baths is Spring Bay, a popular snorkeling destination that is home to some of the most unique sea creatures. Fishing is prohibited in the area, so marine life is abundant. Whether you’re a beginner or an expert, you’ll love exploring these waters. A manicured grassy area leading to the beach is perfect for a picnic lunch or to play some games.

This horseshoe-shaped, coral-sand beach can be reached by boat or via foot trail from The Baths. Devil’s Bay has fewer crowds than The Baths, but still offers exciting snorkeling, scuba diving and swimming in its azure waters. Its greatest highlight is a cave filled with glimmering water that reflects on cave walls dotted with cup corals and colorful sponges. Take a look below the surface at the dazzling marine life, including glassy sweepers.

Once the capital of the BVI, Spanish Town — known as The Valley to locals — is found on the southwest corner of the island. A part of Yacht Harbour, you can easily access the town with your Virgin Gorda yacht charter. Dining and shopping await you, with restaurants featuring traditional cuisine, and authentic arts and crafts shops. A special time of year in Spanish Town is the Fisherman’s Jamboree, celebrating the island’s second largest industry. Watch the fishing competitions, enjoy the music, and then sample some of the freshly caught seafood.

Just north of Yacht Harbour is Savannah Bay, an exquisite sandy beach that has something for everyone. Families love this spot because of the clear view to the ocean floor and its very gradual underwater slope. Watersports enthusiasts enjoy sea kayaking and snorkeling. Spend the day swimming and lounging on the beach, and cap it off by watching the stunning sunset.

A national park that contains the ruins of an abandoned 19th-century mine and factory, the Copper Mine is a tourist attraction and protected area. It’s said that copper was originally discovered on Virgin Gorda and it has played an important role in the island’s history. The Spaniards were the first Europeans to mine copper in the area, but it was Cornish miners from England who built what remains today. Restoration efforts are under way to stabilize the ruins for curious explorers, but adventurers flock to the site for hiking and bird-watching.

The highest point on Virgin Gorda is Gorda Peak, located in a vast, undeveloped national park on the northwestern ridge, not far from the North Sound anchorage. Hike to the summit of Gorda Peak and enjoy a panoramic view of the Virgin Islands archipelago. While making the trek to the top, enjoy the flora and fauna, including hummingbirds, endangered plant species, zebra butterflies, and the smallest lizard in the world, the Virgin Gorda gecko.

The legendary and luxurious Bitter End Yacht Club is worth a visit on your charter in Virgin Gorda.

Virgin Gorda is a must-stop on your charter in the British Virgin Islands.