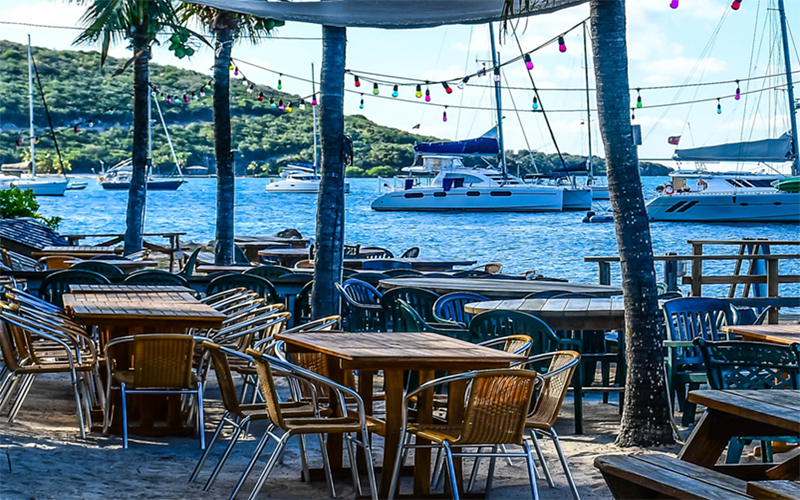 Best Beach Bars in the BVI

On your BVI yacht charter you’re pretty much guaranteed a good beach, a good tropical drink, and a stunning viewpoint – the latter of which is of the water. And in a place like that, you need a good beach bar to make your trip complete.

Fortunately for you, the British Virgin Islands boast many shores where you can anchor your yacht, hop on the sand, and belly up to a good beach bar.

With everything from rustic shacks to established bars, all with strong island drinks, here are our favorite beach bars in the British Virgin Islands:

On White Bay on Jost Van Dyke, you’ll find one of the Virgin Island’s most iconic beach bars – the Soggy Dollar. The bar, which draws crowds looking for an afternoon cocktail, lacks a dock. So, you’ll have to get “soggy” when you hop of your yacht and head ashore. But that’s part of the experience!

If you go, be sure to order a Painkiller, the bar’s signature blend of premium rum, cream of coconut, pineapple and orange juice, topped with fresh-ground Grenadine nutmeg. It’s a Caribbean classic! The bar is the perfect place to laze away an afternoon, swim up, lounge in a hammock, or find a shady spot under a palm. The bar was hit hard by Hurricane Irma. But here’s the good news: It was one of the first to rebuild, and today, it’s fully up and running now.

Also located on Jost Van Dyke, Foxy’s is an iconic bar founded by a famous fellow: Foxy Callwood, an “island guy” who can be seen wandering the island barefoot, singing and playing Calypso music, and engaging in friendly banter around the bar. A native of the island, Foxy opened his bar in the 1960s, when he thought attendees of the British Virgin Islands’ harvest festivities needed a place to grab a drink as they gave thanks for a great harvest. Nothing more than a cement slab, he stayed in that part of the island for two years, and in 1968 moved the bar to its current location.

Today, it’s known for its vibrant character, onsite brewery, and unique décor. The pub is decorated with hanging T-shirts, bandanas, hats and even underwear. Rumor has it that if you bring a hat or a shirt from your hometown, it will become part of Foxy’s wall hangings. Foxy’s survived Irma mostly intact; in fact, the bar served as a command center for the island (thanks it part to having one of the only working refrigerators). Today, it’s a must-see bar on Jost Van Dyke on any BVI yacht charter.

Bomba’s had a reputation on Tortola; from the infamous “full-moon parties” thrown by the Bomba, the “full moon party king,” himself, to the eclectic music, naughty decor and dance-filled parties. There wasn’t anything like it on Apple Bay in Tortola, or, well, anywhere in the British Virgin Islands.

Unfortunately, the bar was completely destroyed by Hurricane Irma, and although they’ve yet to reopen, the lore still lives on. Hopefully, one day Bomba’s “Midnight Tea” – a secret recipe of rum, fruit juices, and local mushrooms believed to have psychotropic effects – will start flowing there again soon.

For fans of reggae, Quito’s has always been a must-visit destination for decades. Founded by Quito Rymer, a musician who used to tour with Ziggy Marley, the bar (and adjacent inn) are well-known for throwing lively reggae parties with Quito performing solo several nights a week.

The bar, inn and restaurant – located on Cane Garden Bay – did unfortunately experience significant damage during Irma. But the good news is that Quito’s is coming back better than ever. The bar projects to be fully up and running for the 2018-2019 charter season. And if it’s open, there isn’t a more popular night club in all of the BVI.

If you’ve ever wanted to live the pirate life, you have to stop at the famous floating bar Willy T. The bar has a notorious reputation for drunken fun, as visitors walk the plank (sometimes in the nude). After being located in the Bight on Norman Island for decades, the rebuilt bar (she suffered extensive damage during Irma) has found a new home in Great Harbor on Peter Island. And Willy T is still a favorite of charter guests. If you’re headed to Peter Island, make sure you stop at Willy T.