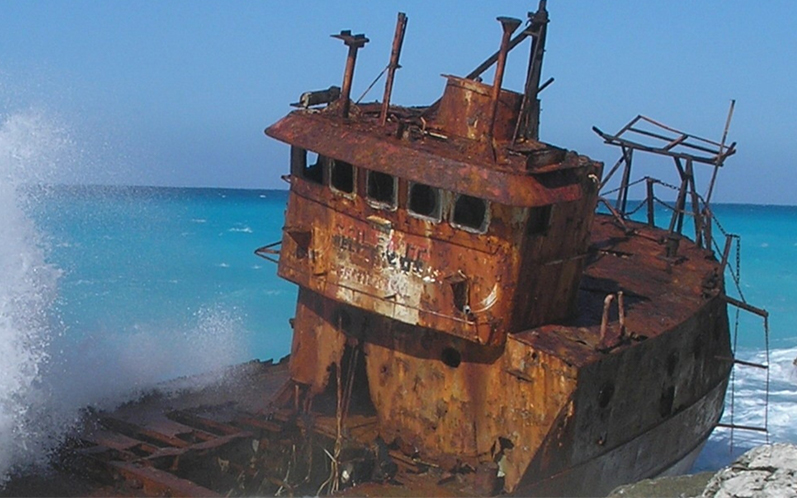 Bimini’s location on the edge of an underwater cliff that plunges down thousands of feet make it one of the most exciting dive destinations in the Bahamas. Not only is it the location of the Bimini Road – with its perfectly shaped underwater steps that are believed to be the road to the lost city of Atlantis – it is also where you’ll find three fascinating shipwrecks to explore.

Just south of Bimini is the wreck of the Sapona, a rusted shipwreck that sits high out of the water. Surrounded by less than 20’ of crystal clear water, it is one of the top snorkel and shallow dive wrecks in the world.

This 270’ ship was built by Henry Ford in 1911, and transported troops just once during World War I. Following the war, the Sapona was used by rumrunners between the Bahamas and Florida during Prohibition. Rumor has it that she later became a private nightclub for drinking and gambling.

In the late 1920’s, a hurricane drove the Sapona aground between South Bimini and Cat Cay, and part of the stern was ripped and submerged during the 2004 hurricanes. Today, she is quite popular with divers and snorkelers, and with her shallow depth is a great spot for beginners to practice wreck diving. Explore the engine room, the bow, the huge prop, and the bullet holes left behind by target practice during World War II. The wreck also attracts marine life such as trigger fish, lobsters, grunts and various reef fish.

The wreck does not have a mooring buoy nearby, so private boats and yacht charters must be careful when anchoring.

Wreck of the Hesperus/Turtle Wreck

The Hesperus is a shallow wreck on the Grand Bahama Bank just off Bimini that is a favorite with divers and photographers. A cement barge that sunk with its cargo, you’ll find bags of hardened cement along the sea bottom and on the ship. The top of the structure is less than 10’ under water, perfect for snorkelers. It sits on the sandy bottom at about 20’ below the surface.

Because this wreck is shallow, there is usually plenty of sunlight, leading to the growth of brilliantly colored corals that are home to hundreds of tropical fish. It really has become its own ecosystem. Water temperatures are warm year-round, making it one of the best rated spots for diving and encountering marine life.

Underwater photographers love the Hesperus because it’s a shallow wreck dive with spectacular fish and other marine animals, but adventurers flock here for night dives. In fact, the nickname Turtle Wreck comes from the loggerhead turtles that gather on the wreck at night. Night divers will also encounter stingrays, triggerfish, red snapper, mackerel, pompano, lobsters, kingfish and grunts, while some have spotted barracuda, remoras and nurse sharks. If you’re lucky, you’ll spy a blacktip or hammerhead shark swimming through the wreck.

The Bimini Barge is a 120’ vessel that sunk during a hurricane in the late 1980s. She now sits upright on a sandy bottom 100’ below the surface on the edge of the continental shelf, and the top of the barge can be reached at 65’. This popular deep water wreck has fantastic visibility and an abundance of marine life although there can be a very strong current at times.

The wreck has become a beautiful artificial reef, overgrown with corals and sponges. You could see large grouper, barracuda, jack and sharks swimming through the hull. Since passageways are narrow, it’s recommended that only seasoned divers swim among these big fish.

The Bimini Trader is a 90’ freight vessel that was severely damaged during Hurricane Andrew in 1992. Located just offshore of South Bimini, and not far from the Bimini Barge, the ship is lying upside down at a depth of 85’. This is a spot where experienced divers can see several species of schooling Caribbean fish, plus loggerhead turtles, goliath groupers and bull sharks.

The current can be very strong in this area because of its proximity to the continental shelf and gulf stream, so this wreck is only recommended for seasoned deep sea divers.