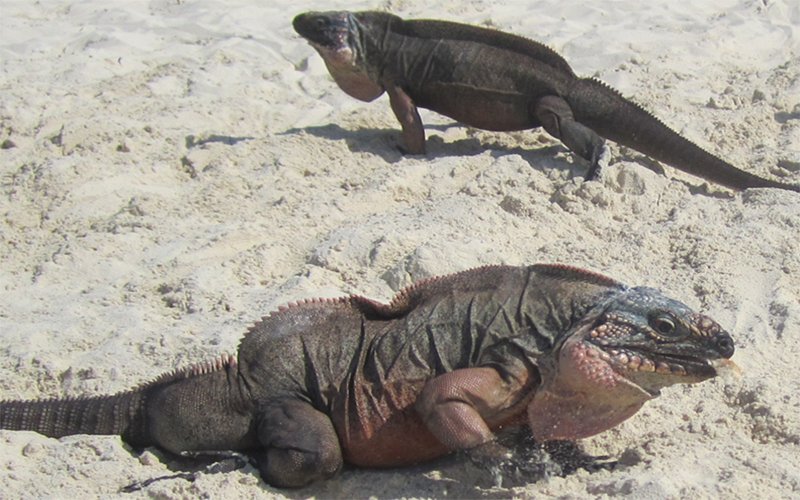 Located just 30 minutes from Nassau, horseshoe-shaped Allen Cay is the gateway to the Exumas. One of the northernmost islands in the Exumas chain, Allen Cay is home to beautiful anchorages and postcard-worthy beaches. But the real draw are the Allen’s Cay rock iguanas.

You’ll notice them right away, as several live right on the beach and wade in the surf. And at nearly three-feet in length, they’re hard to miss. As a stop on a Nassau yacht charter, Allen Cay is a must-see. Just make sure to bring some lettuce or grapes to feed the lizards!

Want to plan your trip to Allen Cay? Here’s everything you need to know about visiting Iguana Beach on Allen Cay. 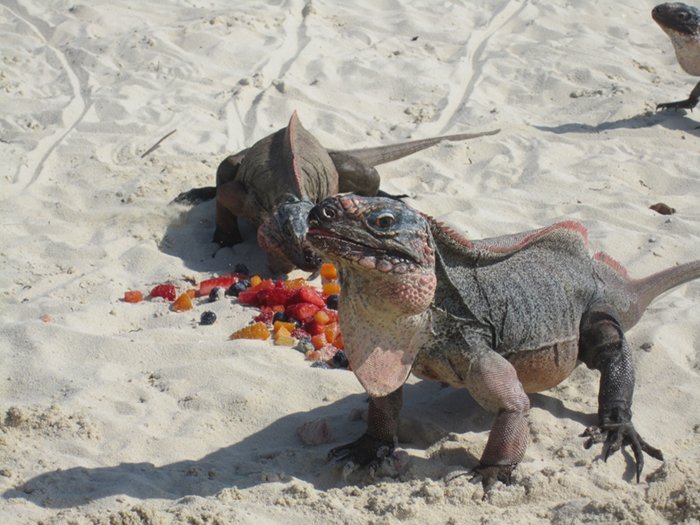 How to See the Allen Cay Iguanas

Allen Cay – which is actually three islands, including Allen Cay, Leaf Cay and Southern Allen Cay – is located a short cruise from Nassau, about 45 minutes. As Allen Cay is uninhabited, you can only reach the island by boat. There are great anchorages off the southern shore. Then take a tender or dingy ride to the so-called “Iguana Beach.”

Although they’re commonly referred to as Allen Cay iguanas, they’re officially known as Northern Bahamian Rock Iguanas. These reptiles are native to the Exumas islands, and although there is a half dozen or so islands with iguana populations, Allen Cay has the largest “mess” (which is the term for a group of iguanas). Be sure to bring your camera! A few facts about the Northern Bahamian rock iguanas:

Do be respectful around the iguanas. The Northern Bahamian rock iguana is critically endangered, and according to the Iguana Foundation, they were believed to be extinct in the early 1900s.

There are just an estimated 5,000 animals left in the wild. In addition to Allen Cay, you’ll find iguanas, as far south as Leaf Cay and Adderly Cay, as well as Bitter Guana Cay in the middle region of the Exumas. There is also a population on Andros Island.

Allen Cay is the perfect stop in the Exumas for an overnight, and Bahamas yacht charters have many ways to visit these islands. They include:

What Else to Do on Allen Cay

After you’ve spent some time getting to know the iguanas, there’s still plenty to do on Allen Cay. A few must-do activities include:

What’s Nearby: Exploring the Surroundings

Being so close to Nassau, Allen Cay and the iguanas is a short cruise to the best of the northern Exumas. Highbourne Cay, Norman’s Cay, and the Exuma Cays Land and Sea Park are all just a short cruise away. Some of the best spots to see after visiting Allen Cay include:

Ready to plan your visit to Allen Cay? Contact a charter broker with Worldwide Boat to learn more about luxury Exumas yacht charter vacations. Allen Cay is the perfect itinerary stop on a visit to the northern Exumas.